The Joseph H. DeFrees Hydraulics Laboratory is the focal point of research and experimental studies in the environmental fluid mechanics and hydrology program. The lab is named after engineer and benefactor Joseph DeFrees ‘29 CE.
Professor Edwin “Todd” Cowen has been the director of the laboratory since he joined the Cornell faculty in 1998.

Hydraulics and hydrology deal primarily with the occurrence and movement of water and other fluids on the surface of the earth. It has been our challenge to make water do what civilization needs it to do like: open channel flow and deliver aqueducts with water, manage reservoirs, dissipate energy as water falls off a spillway. Faculty, students, and researchers are actively engaged in not only the traditional engineering applications that deal with river engineering, the hydrology of surface drainage and runoff, pipelines and conveyance systems, groundwater, flooding and its prevention, coastal processes and near shore oceanography, hydroelectric generation, water supply and distribution, irrigation, and fluid measurement. The movement and dispersion of water and pollutants in the unsaturated zone and in water supply aquifers is of great concern.

The state-of-the-art turbines and tilting water tanks reproduce some of nature’s hydrodynamic complexities in a variety of test conditions. Waves roll over a ripple bed. An artificial stream tumbles down the gentle slope of a flume. A turbulent, meandering current surges through a broad channel. Lasers flash as high-speed cameras record the scattered light from test particles in the tanks. 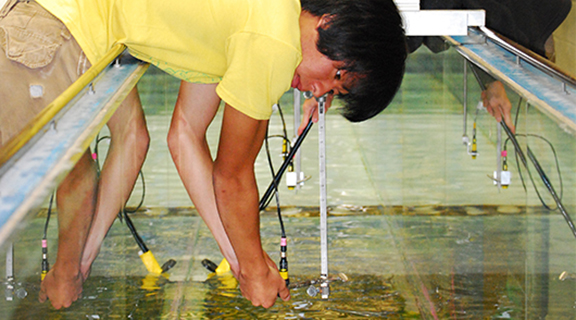 The Long Stroke Wave Tank (LSWT) is designed to model a complex variety of waves and, in particular, complex solitary wave patterns. It is equipped with a unique 4m stroke hydraulic wave paddle, located at one end of the facility. This unusally long stroke is ideal for generating packets of solitary waves allowing wave-wave interaction studeis to be carried out in carefully controlled detail.

The test section, which is 32m long, 0.6m wide, and 0.9m deep, has side walls constructed of plate glass and a bed constructed of painted steel. Located approximately at mid-tank is a false bottom test section that can be utilized for a variety of studies, including sediment transport, fluid-structure interaction, and flow over irregular morphology. The facility can be fitted with a standard 1 on 10 painted wood beach or a 1 on 20 stainless steel frame supported glass beach. The latter is ideal for inner surf and swash zone studies as it allows excellent optical access to the flows from below. The beaches can be covered with horse hair (a packing material), which drops the reflection coefficient to less than 5%.

The hydraulic wave paddle has a maximum stroke of 4m and is capable of driving regular and irregular waves across a broad frequency spectrus in addition to multiple solitary waves.

This facility was originally commissioned when the DeFrees Hydraulics Laboratory was opened in 1984. The 4m wave paddle is a new addition in 2008 funded by Spansion, Inc. 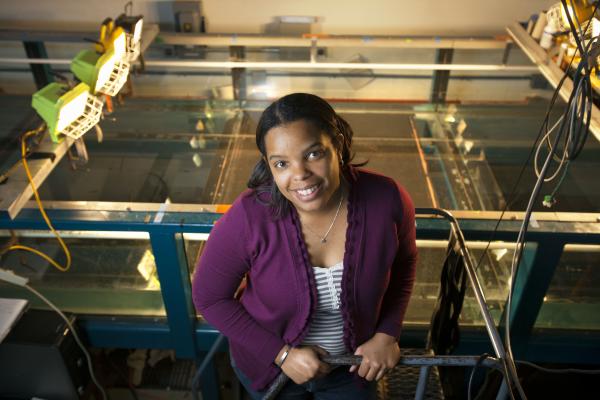 The Wide Meandering Wave-Current Flume (WOCF) is designed to model shallow coastal waters, rivers, estuaries, the littoral zone of lakes, and more generally any environment where the horizontal length scales are long relative to the depths. The aspect of the facility that makes it truly unique in its width, which allows the natural instabilities in the lateral to grow, leading to features such as the lateral meandering of plumes as they advect downstream and scale dependent dispersion.

It is a recirculating type open channel flume. The test section is constructed entirely of plate glass and is 2m wide, .64m deep and 15m long. It is supported by tubular steel frame allowing excellent optical access from all sides, including from below. The inlet and outlet sections are reinforced molded polyethylene with a return loop constructed from two 16" polyvinyl chloride (PVC) pipes. The outlet section is isolated form the inlet and test sections to prevent the transmission of vibrations into the facility. The inlet section has a nominally 4:1 contraction in the vertical to aid in conditioning the turbulent flow. The test section terminates with a removable broad crested weir designed to force the flow critical, ensuring that any wave energy propagates out of the test section and is not reflected back upstream.

The facility is equipped with two custom 316 stainless steel impeller-based pumps. A variable frequency controller drives each pump. All the materials used in the two custom pumps, and elsewhere in the facility, are specified for marine environments, providing a corrosion-free and non-toxic environment for marine and freshwater life. The sealants used are NSF approved potable water sealants.

Funding for this facility is provided by the Office of Naval research and is part of the DARPE-ONR Chemical Plume Tracing Program.

The Tilting Wind-Water Tunnel (TWWT) is suited for performing air-water interface experiments as well as modeling riverine systems. The TWWT is designed to model coupled air-water flows but can be used as a single-fluid facility as well for the study of atmospheric (air) flows or water flows. The  20m long, 1m wide, and 0.90m deep test section has a painted steel bottom with mixed tempered plate glass and Plexiglas side walls. The roof of the facility can be set between o.5% and 2.6% (-0.3° and 1.5°) and one of its principal design uses was the study of rearation of river flows. The maximum operating water depth of this closed recirculating loop water flume is 0.30m.

The facility is equipped with a variable speed, computer controllable, 25 HP pump capable of generating a maximum water flow rate of 0.25 m3/s. The air flow system is an open intake/outlet system with a variable speed, reversible, computer controllable, 12 HP fan capable of moving a maximum of 11.8 m3/s. This airflow rate is sufficient to generate strong wave action, wave breaking, and air entrainment.

The TWWT is adjacent to an off-line reservoir connected to the facility that has a volume of 31m3. It is equipped with a gas-bubbling system for stripping oxygen or dissolving gasses and a recirculation pump for mixing.

The facility is equipped with a Lagrangian Sled designed to accelerate quantitative imaging equipment up to the mean flow speed (a maximum of 10 m/s) where it can make measurements over a distance of 1.5m in a Lagrangian reference frame. In collaboration with Mechanical and Aerospace Engineering, the facility can be fitted with an active grid for enhancing the turbulent energy levels in the facility relative to the mean flow. 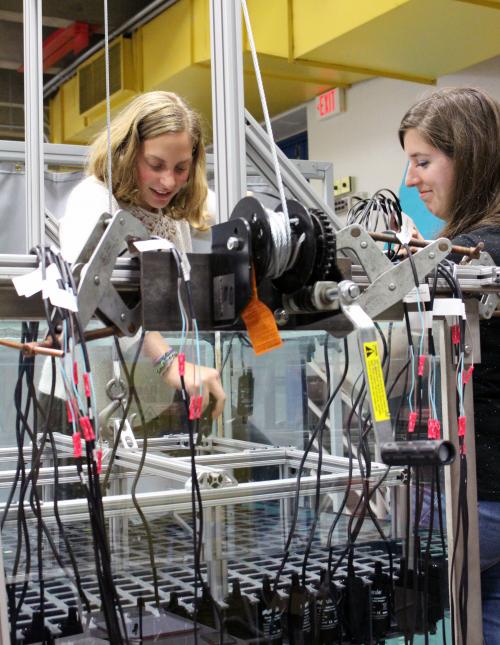