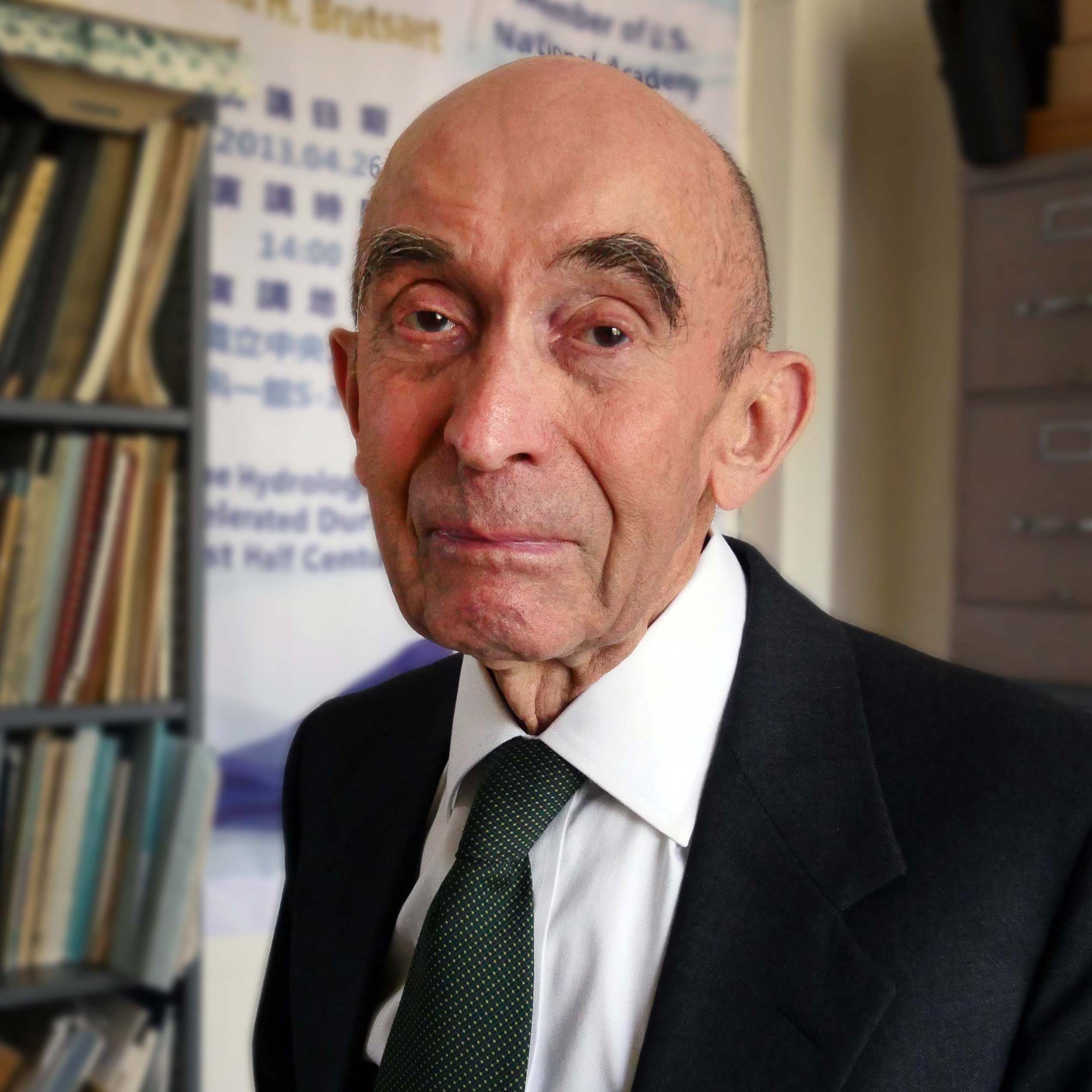 During his fifty years at Cornell, Professor Brutsaert has been active in teaching and research in hydrology and fluid mechanics, with special focus on groundwater and soil water flow, land surface-atmosphere interactions, atmospheric boundary layer turbulence and more recently climate change effects on the water cycle. All the while, he has advised countless undergraduate students and he has mentored some 35 M.S. and Ph.D. students.
Prof. Brutsaert was born and grew up in Ghent, Belgium. Upon graduating with a degree in water and soil engineering from the University of Ghent, he originally aspired to a career in practice with a U.N. based or other international organization, to improve the plight of developing countries. To round out his background, he followed up with an M.S. in irrigation engineering in the more arid environment of Davis at the University of California. During these studies, he soon realized that no good technology is possible without the underpinnings of fundamental science; this made him change direction and decide to pursue the Ph.D. Upon its completion in 1962 he was invited to join the CEE faculty at Cornell; he has been here ever since, except for sabbatical or other short leaves of absence in New York City, Japan, the Netherlands, Belgium, Switzerland and China.
Prof. Brutsaert is author and co-author of some 200 refereed articles in scientific journals, in addition to two books. The first, "Evaporation into the Atmosphere" (1982, Springer), was also translated into Russian (1985, Hydrometeoizdat, Leningrad). His second book "Hydrology: An Introduction" (2005, Cambridge University Press) was translated into Japanese (2007, Kyoritsu Shuppan), Macedonian, Albanian and more recently Chinese (2017, China Meteorological Press).
For his contributions, Prof. Brutsaert has received numerous awards. Among the more important ones, in 1994 he was elected as a member of the U.S. National Academy of Engineering; in 1995 he was awarded "Doctor Honoris Causa" by the University of Ghent, Belgium. In 1999 the American Geophysical Union (AGU) awarded him the Horton Medal, and in 2015 its highest recognition the Bowie Medal; in addition, the AGU selected him for the Hydrologic Science Award in 1988 and for the Langbein Lectureship in 1997. The American Meteorological Society (AMS) selected him to present the Horton Lecture in 1993; it gave him the Charney Award in 2003, and it made him an honorary member in 2012. Overseas, the Japan Society of Hydrology and Water Resources chose him for its International Award in 2002, and it made him Honorary Member in 2010. The Japan Society for the Promotion of Science (JSPS) gave him the Award for Eminent Scientists in 2005.
Over the years, Prof. Brutsaert has been active in service to the University as well as to the profession. At Cornell, he served two prolonged stints as Director of Graduate Studies of CEE. In the American Geophysical Union, an organization of some 9,000 members, he was elected as President (1992-1994) of Hydrology. In 1996-1998 he served as Council member of the AMS and in 2010-2011 he served as Section Chair in the U.S. National Academy of Engineering.

Professor Brutsaert's interests have broadly covered hydrology and fluid mechanics in the environment. His activities related to atmospheric processes have been mostly with the ultimate objective of developing physically based methods to calculate regional evaporation from natural land surfaces covered with different types of vegetation. One of these approaches makes use of meteorological data (wind speed, temperature, and humidity) observed in the outer regions of the atmospheric boundary layer by means of different types of sounders and profilers. These techniques have been tested and calibrated in a number of large-scale field experiments in various types of terrain. In other contributions he has focused on groundwater, infiltration and runoff. A more recent initiative has analyzed climatic time-scale trends in different hydrologic variables, such as evaporation, groundwater storage and runoff, within the context of global change.