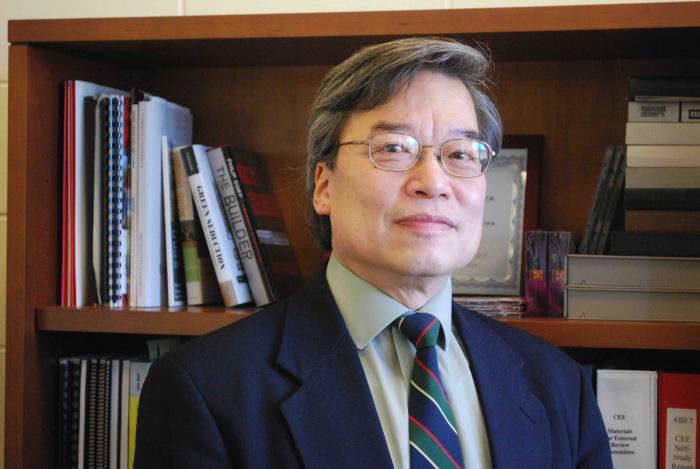 Philip Li-Fan Liu was born in China and moved to Taiwan with his family when he was two years old. He grew up there and received his B.S.C.E. in 1968 from National Taiwan University. After mandatory military service, he was offered a full scholarship from Brown University to study applied mathematics and a full research assistantship to join the Parson’s Hydrodynamic Laboratory at the Massachusetts Institute of Technology (MIT). In August 1969, Liu arrived in Cambridge, MA and started his 46-year academic career in the United States.

During his first year at MIT, Liu worked under the supervision of Professor Lynn Gelhar to investigate turbulent airflows in a circular pipe whose wall was covered by a layer of porous material. He gained knowledge and experience in measuring turbulent flows, using the hot-wire velocimetry. In the summer of 1970, Liu joined Professor Chiang C. Mei’s group to study water wave theories and their applications to coastal engineering. In 1971, Liu wrote his M.S. thesis on viscous damping of water waves within a bounded domain, using the boundary layer analysis. After participating in several projects, Liu focused his research on breaking wave induced coastal currents in the vicinity of a breakwater for his doctoral research. He developed the first combined refraction and diffraction wave theory, enabling the quantitative evaluation of the driving mechanism of a coastal current system.

In the summer of 1974, Liu completed his Ph.D. at MIT and moved to Ithaca, NY, where he was appointed as an assistant professor in Civil and Environmental Engineering at Cornell University.  He was promoted to full professor in 1983 and was then honored with an endowed professorship in 2008—the  Class of 1912 Professor of Engineering. Liu served as the associate director of the school from 1985-86, and as the associate dean for undergraduate studies in the College of Engineering from 1986-87. He then served as director of CEE from July 1, 2009 to June 30, 2015.

With continued support from Cornell University and external funding agencies, including the NY Sea Grant program, National Science Foundation, Army Research Office, and Office of Naval Research, Liu was able to maintain a formidable program in coastal oceanography and engineering. Liu has graduated 32 Ph.D. students whose theses covered a wide range of topics including groundwater flows, water wave theories, tsunamis dynamics, wave-breaking processes, sediment transport processes, and interactions of water waves with structures. A numerical model, COMCOT (Cornell-Multi-grid-Coupled-Tsunami-Model), based on nonlinear shallow water wave theory, was developed by several of Liu’s Ph.D. students and has been used internationally in developing tsunami warning systems and tsunami hazard maps. Another numerical model, COBRAS (Cornell-Breaking-Waves-and Structures), based on the Reynolds Averaged Navier-Stokes equations, is also widely used internationally as a tool for preliminary design of coastal structures, and for conducting research in wave-solid interactions, including water waves generated by a landslide.

Liu has taken the leadership role in organizing several important post-tsunami field studies, including the 1992 Flores Island (Indonesia) tsunami and the 2004 Indian Ocean tsunami. The data collected from these surveys is valuable in understanding tsunami dynamics, and results were reported in Nature and Science, respectively.

Liu has been actively promoting tsunami research by organizing workshops and meetings. In the last ten years, he has been organizing annual South China Sea Tsunami Workshops (SCSTW), providing a forum for tsunami researchers in the South China Sea region to exchange knowledge and experience and to develop the tsunami hazard mitigation program. Since 2007, nine workshops have been conducted in six different cities, in four different countries.

Liu is a member of the National Academy of Engineering (USA), an Academician of Academia Sinica (Taiwan), a Fellow of the American Geophysical Union, and a distinguished member of the American Society of Civil Engineers. He also received the ASCE Walter L. Huber Civil Engineering Research Prize (1978), the J. S. Guggenheim Fellowship (1980), the ASCE John G. Maffatt & Frank N. Nichol Harbor and Coastal Engineering Award (1997), the ASCE International Coastal Engineering Award (2004) and the Alexander von Humboldt Research Award (2009). Most recently, he was awarded the Hamaguchi Award for Enhancement of Tsunami/Coastal Disaster Resilience (2017).

Since 2007, Liu has been honored with the Kwoh-Ting Li chair professorship at the National Central University (NCU) in Taiwan. This endowed chair is the highest-level professorship in the university. Since 2015, Liu has been the Vice President for Research and Technology, and Distinguished Professor in Civil and Environmental Engineering at the National University of Singapore, where he has established an active coastal research group.

On June 30, 2016, Liu officially retired from Cornell and was appointed as the Class of 1912 Professor in Engineering, Emeritus. After retiring from his current position at NUS, Liu will eventually reside in the U.S. with his wife, Christine Shoemaker, to be near their children and grandchildren.