Waterborne diarrheal diseases are responsible for two million deaths each year, with the majority occurring in children, according to the World Health Organization. In some areas of developing nations, the only way to assess water quality is to use personal judgment.

“People rely on looking, smelling or tasting, but you can’t really tell, biologically, whether it’s safe or not safe from contamination,” says Ruth Richardson, a Civil and Environmental Engineering (CEE) associate professor who is working to develop a rapid test for waterborne diseases.

The idea for the test emerged after Richardson met Sera Young, Ph.D. ’08 and an assistant professor of global health studies at Northwestern University who had been a research scientist at Cornell. Young was examining water insecurity in developing nations, but didn’t have a way to measure water quality. Richardson had a background in techniques for assessing quality, but mostly in bioremediation and bioenergy.

So the two formed a partnership—along with CEE senior lecturer Monroe Weber-Shirk—and used a seed grant to merge their research interests. They started with a first-of-its-kind study that linked quantitative assessment of water quality to people’s perceptions of how safe it was. Their study, “Evaluating human sensory perceptions and the compartment bag test assays as proxies for the presence of concentration of Escherichia coli (E. coli) in drinking water in Western Kenya,” was published in the American Journal of Tropical Medicine and Hygiene.

“There definitely is a correlation, but it isn’t foolproof enough that you should just trust it,” said Richardson. “There were people who rated their water quality at the top level and they had a high level of fecal bacteria in it.”

Seeing the need for a rapid water quality test, Richardson began working on a prototype pathogen panel, a tool that could measure a dozen different waterborne viruses, bacteria and protozoa. She did this using polymerase chain reaction (PCR), a technique she had become familiar with through previous microbiology projects.

With PCR, enzyme-mediated reactions replicate the DNA of target organisms, such as E. coli, making billions of copies of their DNA until it reaches a detectable level. The concentration of the organism in the sample can then be compared to known standards in order to determine whether a water source contains dangerous levels.

Richardson’s prototype was a success, and now she is using it as part of several other research projects. One project is using the pathogen panel to assess Honduran water filtration plants. The plants being tested are engineered by Cornell’s AguaClara program with the goal of bringing clean drinking water to rural communities.

Another project will assess water quality in Hudson River Valley tributaries, where pollution and sewage discharge remain a concern. According to a 2017 report from the non-profit Riverkeeper, 21 percent of Hudson River estuary samples failed to meet federal safe-swimming guidelines.

And while Richardson’s pathogen panel is not yet the rapid test she had originally envisioned, she’s received funding from the National Science Foundation to partner with Biomeme, a Philadelphia-based startup that provides a quick-testing platform that can be combined with her panel. Richardson plans to test the new platform at New York state parks this summer.

“Swimming beaches normally just measure fecal indicator bacteria, they don’t measure pathogens and the methods take a day to get the results back,” explains Richardson, adding that her test could provide instant results while also helping to identify the sources of harmful pathogens that are discovered.

Such a test would be useful in places like Lake George’s popular state-owned Million Dollar Beach, which has experienced several closings over the past several years because of the presence of E. coli in the water, the source of which has not been determined by officials. 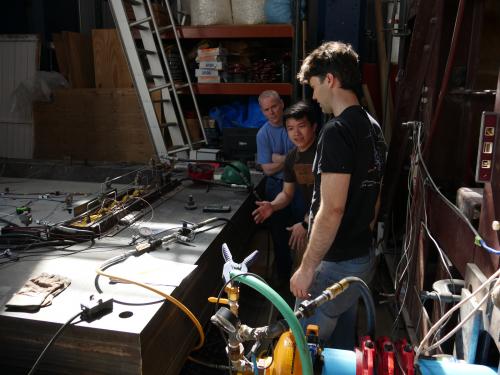 CEE assistant professor Greg McLaskey studies the mechanics of friction, earthquakes, fractures and other processes that generate sounds and vibrations in large-scale rocks. Lately he has been interested in studying how fluids might flow through networks of underground joints and fractures, and how the fluids can potentially trigger earthquake

Better understanding subsurface fluid pathways is important for a range of energy applications, including enhanced geothermal heating systems, which could reduce reliance on hydrocarbons such as oil, gas and coal. Little is understood about the dynamic between such systems and earthquakes.

“I want to know how the act of pressurizing a fault with fluid potentially cause an instability like a tremor to occur,” asks McLaskey. “On a mechanical level, how can we model it? What are the relevant parameters? Maybe there’s a way you can change the operation of an enhanced geothermal system or a wastewater disposal project that will minimize seismic risk.”

To answer these questions, McLaskey is using a first-of-its-kind machine to simulate the pressure that is exerted on rocks deep below the surface. The biaxial rock-squeezing machine, as McLaskey calls it, is a 3-by-5-meter steel frame lined with dozens of hydraulic jacks. When a sample such as a slab of granite is placed inside, the jacks use the steel frame as an anchor and each apply up to 100 tons of force on the sample.

“What I do is I basically make earthquakes in a lab,” says McLaskey. “I create conditions that are sort of similar to what happens a couple kilometers down in the earth by squeezing rocks. And I’m trying to do this at the biggest scale possible in a lab.”

McLaskey hopes to link patterns that he sees in the lab with any patterns that emerge from seismicity often observed near wastewater disposal wells associated with oil and gas operations or during geothermal energy operations. He says miniature tremors, too small to be felt by humans at the surface, can provide valuable information if they can be recorded and analyzed—an effort his co-investigators on the seed grant are conducting.

“So if in the lab I see sequences of tremors that are migrating in a distinctive way, that’s something we can potentially record in the field as well,” says McLaskey. “If I can figure out that sequence is being driven by a specific mechanical process and we see the same thing in the field, that gives us a good indication the same process is happening.”

To simulate water circulating through a fault deep within the earth, McLaskey says he is using a smaller-scale rock-squeezing machine and conducting experiments on a transparent plastic sample “so you can actually see how fluid is propagating through this rough interface.”

As the machine begins to squeeze, a clicking noise can be heard, indicating the sample’s fault has slipped. Video footage reveals the water briefly getting sucked backwards toward the point of injection before beginning to spread again, which was a surprise to McLaskey the first time he saw it. He says the backward motion of the water is due to suction caused by the fault slipping.

“Once you start mixing fluids and fractures, the physics and the mechanics get very complicated and we really don’t fully understand it,” says McLaskey, who is working to build models of the phenomena he observes in the experiments.

“It definitely gives the research more of a sense of purpose, that I can develop a model in a lab and actually test it against field observations,” says McLaskey. “That’s cool.”